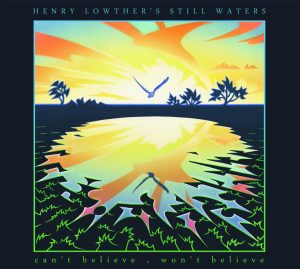 If any jazz ensemble can be said to define the word “prolific” it’s
not Henry Lowther’s Still Waters. The band’s debut album, ID,
appeared in 1997. can’t believe, won’t believe is its second release, just 21 years later. Good things, as they say, come to those that wait.

Bandleader, composer and trumpeter Lowther has been a busy
professional musician for over 50 years. He played at Woodstock in 1969 with Keef Hartley, was associated with the bands of John
Dankworth, Gil Evans and George Russell and has a long history as a session player, a performer with classical ensembles including the London Philharmonic and a free improvising musician.

The pervading mood on can’t believe, won’t believe is relaxed and calm—the calmness that comes from a confidence in one’s talent, the knowledge that there’s nothing to prove. This is, after all, a quintet featuring some of the finest jazz musicians on the scene. Saxophonist Pete Hurt (Carla Bley Very Big Band, Andy Sheppard), pianist Barry Green (Ingrid Laubrock, Charles McPherson, Brigitte Beraha), bassist Dave Green (Sonny Rollins, Stan Tracey) and drummer Paul Clarvis (Herbie Hancock, John Taylor, Kenny Wheeler) are as masterful as their bandleader. The band is well-named: to quote a second cliche, still waters run deep and beneath the calm there’s plenty of musical passion.

Alongside the quiet beauty of “Can’t Believe, Won’t Believe,” “Mateja Sleeps” and “Amber,” a song dedicated to Barry Green’s baby daughter that quite rightly opens with the pianist’s delicate
and optimistic playing, sit the slightly brasher “Saippuakauppias,” the jagged “Lights Of The North Circular”—a tribute (if that’s the word) to a north London highway, driven by Clarvis’s insistent, darting, drums—and the more up-tempo “Something Like,” Dave Green’s bass pulse and Clarvis’s drums crafting a rhythm subliminally inspired (according to Lowther’s notes) by
Morrocan Gnawan percussion.

These six Lowther compositions are followed by the band’s elegant take on “Some Other Time.” It’s a gorgeous version, an object lesson in “less is more,” with Lowther’s performance of the melody underpinned by precise, low-key, backing from the rhythm section. The album closes with the brief “For Pete,” Hurt’s elegy for Pete Saberton, the original Still Waters pianist who died in 2012.

So, 2018 opens with the excellent can’t believe, won’t believe, from the equally excellent Henry Lowther’s Still Waters. The bar is set high. If the rest of 2018’s jazz albums get close to the quality of this truly delightful work then it’s going to be a vintage year.

Trumpeter Henry Lowther has been a creative mainstay of British jazz for half a century and he’s as happy playing mainstream standards as he is duetting with a computer musician in free improvisation. He’s the man who reassured Miles Davis (Dave Holland introduced them) that yes, playing jazz trumpet in a rock context was perfectly possible.  Now, a couple of decades since 1997’s ID, Lowther’s band Still Waters, formed to explore his compositional interests, has released a new album of gorgeous, limpid tunes that make for thoroughly seductive listening. This impeccably recorded music is by turns playful, elegant and ingenious, with Lowther’s legendary warm, rich tone very much to the fore. The band is highly empathetic, with saxophonist Pete Hurt as the perfect fellow frontman and drummer Paul Clarvis knowing exactly when to give the music a cheeky prod. One to cherish.

The trumpet player has long been regarded as the flashy extrovert of any band or orchestra. The stentorian tone of the instrument can drown out the loudest drummer, even, we’re told, bring down the walls of Jericho. Buddy Bolden, it was said, could be heard at the other side of Lake Pontchartrain – a distance of 20 miles.

And yet, running parallel to the bombast of the above there’s also another group. Players more minimalist. Introverts who, nevertheless, show that less can often be more.
Bix, Bobby Hackett, Miles, Chet and, more recently, Tomasso Stanko and Laura Jurd all belong to the latter school.
As does Henry Lowther.

This is only Henry Lowther’s Still Waters’ second album, the band’s debut album, ID, going out in 1997, it is, nevertheless, well worth the wait. No tear-arse tempos nor, by the same token, are there any ten minutes long circular breathing exercises. Instead, it’s clean, relaxed playing. It’s a warm shower on a cool night, or a Pina Colada with lots of ice on a warm summer’s evening. You let the music envelop you – it’s more intoxicating than any cocktail – and you remember just how good a trumpet player Henry Lowther was and still is. This is Bix and the girl saying ‘yes’ all over again.

Up front with him, on tenor, Pete Hurt maintains the mood. Light of tone with a sackful ideas, Hurt proves the perfect partner for Lowther.  Barry Green lays down some delightful piano. No other words fit – delightful it is!  Dave Green, long the doyen of UK bassists, doesn’t put a finger wrong – he never does. I could make that statement without listening to the record and I wouldn’t be open to contradiction. However, I did and I wasn’t!  Paul Clarvis does the job as professionally as he always does.

Six originals by Lowther, one by Hurt and Bernstein’s Some Other Time. Don’t ask me for the other titles. Dark text on a slightly darker background doesn’t make for easy reading. Still, you don’t listen to the sleeve!

There are no upcoming events at this time.

About Me and Still Waters